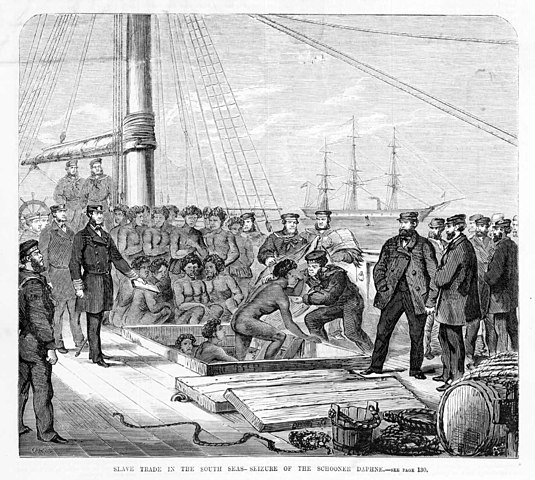 The history of New Caledonia begins around 1500 BC, although some sources claim evidence of settlement going back as far as 3000 BC. The Lapita people were seafarers whose origins can be traced to Taiwan and neighboring East Asian regions. They are named after the site of Lapita, where  a type of ancient pottery was unearthed. These people are thought to be the ancestors of the Polynesians, Micronesians and and some of the inhabitants of coastal Melanesia, including New Caledonia.

Very little is written about New Caledonia until its discovery by British explorer James Cook in 1774. Cook named the islands New Caledonia in honor of his Scottish father, Caledonia being a Latin name referring to the Scottish Highlands, which somewhat resembled northeastern New Caledonia in Cook’s opinion.

It seems that there were a few visitors to the islands in the following years, including French explorers, Protestant and Catholic missionaries and American whalers, but there is not much in the history books other than a few journal entries about the time period leading up to 1853, the year of French annexation. An exception is the unfortunate fate of the crew of the American ship Cutter, who were killed and eaten by natives in 1849.

New Caledonia was claimed for France on September 24, 1853 by Rear Admiral Febvrier Despointes, in an attempt to prevent any similar move by the British, and Port-de-France, today’s capitol city of Nouméa was founded the following year. New Caledonia was established as a penal colony. Between the years 1864 and 1897, around 22,000 French convicts were brought to New Caledonia. In 1864, large nickel deposits were discovered. It turns out that New Caledonia has over 25% of the world supply. Other settlement resulted from the practice of ‘blackbirding’, which is when unsuspecting natives are lured through various deceptive means onto boats and then forced into labor. Around 60,000 indentured laborers were brought to New Caledonia to work on plantations, mines, ships and in various public works. Many were children from the Loyalty Islands who were brought to Grand Terre, but others were sourced from Vanuatu, known originally as the New Hebrides, the Solomon Islands, and even Vietnam, Java and Japan. Additionally, 4,000 political exiles from the failed Paris Commune, known as Communards were brought to the island.

Rebellion against the French by the native Kanak people spiked in the years 1856-59 and again in 1878. In 1867 the guillotine was introduced and over the next two decades, around 80 rebels were beheaded. The Kanak rebellion of 1878 saw the French retaliate by destroying villages and crops. Rebels were deported, executed or forced into labor. Under administrative law, curfews were established. Around the same time, smallpox and measles took many lives. In the period from 1878-1921, the population of 60,000 was reduced by over half leaving a remaining population of only 27,000.

During World War II, New Caledonia was used as a base for the American Navy and Army. At the time, the 50,000 American troops were approximately equal in number to the resident population. After the war, the European population increased and in 1946, New Caledonia officially became a French overseas territory.

The islands prospered during the nickel boom which occurred in the years 1969-1972, bringing a new wave of European and Polynesian settlement. Although they were still the largest ethnic group, the Kanaks were now a minority. Independence continued to be on the minds of many. In the 1980s, pro independence protests resulted in Kanak activists taking 27 gendarmes hostage. The military response resulted in 21 deaths, of which 19 were Kanaks.

In 1998, the Nouméa Accord established a 20 year plan to transfer governance to the local government. This transitional period is to end only weeks from now with a referendum on independence scheduled to take place on November 4, 2018. New Caledonian history is in the making! If the voters so choose, New Caledonia will be its own country.