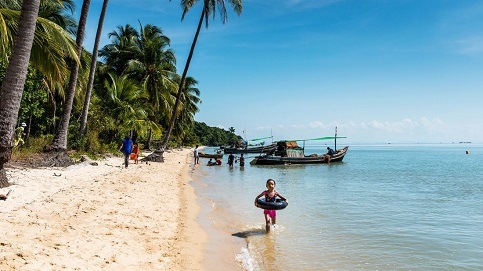 A visit to the Mergui (or Myeik) Archipelago is a completely unique experience in so many ways. Because the islands are almost completely undeveloped, are remote and were restricted to visitors until 1997, one can experience the thrill of being true explorers in an unknown world. The islands and the sea around them are strikingly beautiful, with unparalleled white sand beaches, the clearest water imaginable and lush tropical forests with abundant and rare plant, animal and bird species.

To visit, you will need to join a guided tour and participate in the itinerary of the boat or cruise ship. Tours typically depart from Kawthaung near the Thai border on the mainland. Some tours originate in Thailand at Phuket, which may require some additional paperwork and planning.

There are around 800 islands, some of which are larger in size than some island nations. Others are merely dramatic rock formations arising from the sparkling waters. There are a few settlements, but the main inhabitants of the archipelago are the Moken people, who are known as Sea Gypsies, as they live on the water for most of the year. One of the most unique and rewarding aspects of a visit to these islands is the experience of encountering and interacting with the Moken, who are locally also known as the Salon. Spectacular sunsets, night swims, beach barbeques, out of this world snorkeling, paddleboarding and canoeing through old mangrove forests are just a few of the other amazing experiences one can expect.

In 1783, during the colonial era, British mariner Captain Forrest gave English names to many of the islands. Myanmar, however, renamed almost all of them in 1990. Additionally, there are original Moken names for some of them. With various spelling versions as well, some of the islands may have several different names.

Lampi Island is revered by the Moken people as ‘Mother’ to the Moken and is the largest island in Lampi Marine National Park, Myanmar’s first marine park, established in 1995. Perhaps the most visited destination, it was formerly known as Sullivan’s Island. Along with beautiful sandy beaches and lush tropical forest, Lampi Marine Park’s 1000 species include diverse plants, over 200 bird species, including endangered species such as the plain-pouched hornbill, several eagle species and the crested partridge, sea turtles, numerous amphibian, reptile and mammal species, whale sharks, reef sharks and dugongs. Kayak through ancient mangrove forests or encounter gibbons, the dusky langur monkey or even the scaly anteaters known as pangolins while exploring the islands’ magnificent biodiversity. There are no accommodations on Lampi Island.

The main settlement in Lampi National Park is Ma Kyone Galet on Bo Cho Island, just south of Lampi Island. Here you will find houses on stilts built over the water in a beautiful bay setting, restaurants, tea shops and a pagoda with views of the village. The population of around 850, is made up of Moken and a few settlers from the mainland. The main industry of the village is squid fishing. This is done at night by means of boats, which have long arms with lights stretching over their sides, in order to lure squid to the surface, where they are captured in nets.

Besides squid fishing, the Moken have a long tradition of sea urchin and pearl fishing. The Moken are so at home in the water since childhood, that they develop a protective layer on their eyes that allows them to see more clearly under water.


Other villages are located on Nyaung Wee and Ko Phawt Islands. Nyaung Wee, otherwise known as Buda Island has such clear water offshore, that the fish and marine life are visible even without snorkeling. The island has good hiking trails and the settlement of about 500 people offers the chance to interact with the Moken culture. The Moken families have been known to cook for visitors, while the children are very excited to see and play with tourists.

There are only a handful of established resorts in the area. Boulder Bay Eco Resort is located on Boulder Island, which is named after a boulder perched atop another rock in the bay. One of the furthest out into the Andaman Sea, this island has been rumored to have inspired Peter Pan’s Neverland. Cruises may spend up to two days on Boulder Island, which possesses at least four beautiful beaches and hiking trails, from which one can reach Eagle Rock for stunning views of the surrounding area. There is great snorkeling at the offshore reef and the Resort offers standard, superior and suite bungalows with full board. Another resort is the Myanmar Andaman Resort on Macleod Island, which has a private bay and beach, 22 bungalows, offers breakfast and dinner, and numerous activities such as diving, snorkeling, sea kayaking, fishing, bird watching jungle safaris and short trekking. Wa Ale Island is home to the Wa Ale Resort which offers luxury tented and treetop villas. Nyaung Oo Phee Island, also known as MacKenzie Island,  is the location of the Victoria Cliff Resort which also offers luxury tents and bungalows.

The Mergui Archipelago is a remote part of the world, but word is getting out about these beautiful islands. Further development and upgrades are likely to happen fast, so check for any new options and read the reviews and ratings of those who have visited to find out what these resorts offer.

It would be a difficult task to write about all the islands. Many are basically unexplored, or even undiscovered. A few other spots that are frequently mentioned and may be included in a cruise itinerary include Great Swinton Island, which has one of the longest and most attractive beaches in the Mergui as well as a Buddhist Monastery (inhabited by a single monk) and temple, a village pool table, and many opportunities to explore the mangroves and forests by kayak, stand up paddle boards on the extremely calm water, or on foot. 115 Island, formerly Frost Island, is so named because it’s highest peak is 115 meters high.  Kadan Kyung, formerly known as King Island, is the largest island of the Mergui Archipelago and the location of several settlements as well as French Bay Peak, the highest point of the archipelago. The island of Kanmaw Kyun (Kisseraing under the British) is in the east central part of the archipelago and is the location of the town of Kyunsu, or Kanmaw, where shrimp farming and a rubber plantation contribute to the local economy. The southernmost point in Myanmar is Christie Island.

Popular dive sites include the Burma Banks on the west side of the archipelago, the steep cliffs of Black Rock and Shark Cave, where up to four meter long nurse sharks make their home.

The near future may bring super yachts and resorts to these islands, but for now, it is possible to experience the adventure and thrill of being explorers in one of the least visited places on earth.