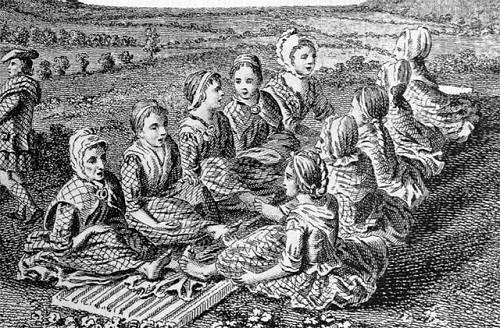 The earliest music in the Scottish Isles was perhaps performed by traveling bards who accompanied their songs with harp. The old church music of the Hebrides has been claimed by a surprising number of researchers to be the real beginning of gospel music, which most assume to have originated from Africa and the slave experience. There were many Scottish immigrants who settled in North Carolina in the 1700s. Many of these individuals and even some of their slaves, spoke only Gaelic! Many, of course, are not convinced by this theory, but research on the matter has taken several of the theory’s proponents to the Hebrides where comparisons of the psalm singing and style of musical worship show surprising similarities to what is heard in black congregations in the USA.

An important tradition in the Hebrides was the ‘waulking song’. Groups of women would sing these songs as they were beating freshly woven tweed against the table to soften it. These songs had many verses and took on the form of call and response. Superstitions prevented the women from singing the same song more than once in a session, or rotating the tweed counterclockwise.

Typical Gaelic instruments include the fiddle, the tin whistle, accordion, guitar and the clarsach, a type of Scottish harp. The bodhran is a small drum that is likely of Irish origin, but which has become common in Scottish folk music over time. Perhaps the instrument most associated with Scottish music is the bagpipe. Families or clans such as the MacCrimmons, who were the official pipers to the MacLeod Clan chiefs, passed on their skills from generation to generation. One of the most acclaimed pipe bands in the Hebrides today is the Lewis Pipe Band. They march every Saturday evening through the town centre of Stornoway from the end of May through the end of August.

Here is a clip of the Lewis Pipe Band marching through town, as viewed through a shop window.

Among the more famous Gaelic singers who hail from the Hebrides are Ishbel MacAskill (1941-2011) who grew up on the Isle of Lewis, Catherine-Ann MacPhee from the Isle of Barra, Kathleen MacInnes, a singer from South Uist, who can be heard on the soundtrack to Ridley Scott’s Robin Hood, and Julie Fowlis, from North Uist who performs the song ‘Touch the Sky’ in Disney’s movie, Brave.

The following video shows Julie Fowlis singing in Gaelic “O Noble Youth Who Has Left Me”. She also plays the tin whistle. She is joined by Donald Lunny and Bruce Molsky. She is also the artist in the clip ‘The Storr, Kilt Rock waterfall, Quiraing, Skye’ at the beginning of this article, singing ‘M Dhomhnallan Fhein’ from her album ‘Cuilidh’.

Niteworks, the Peatbog Faeries, both bands from Skye, and Skerryvore from Tiree, are enormously successful bands representing the Inner Hebrides.

The next video shows breathtaking visual images of Skye and features the Peatbog Faeries who perform ‘Abhainn a’Nathair’ on traditional instruments with a very modern twist.

In the next video, Skerryvore performs ‘The Angry Fiddler’ featuring the amazing fiddling skills of Craig Espie.

The Hebridean Celtic Festival takes place in Stornoway on Lewis every year. It was established over 20 years ago and continues to draw large crowds with its programming of traditional music artists from around the world. The 2017 festival drew a crowd of 16,000 attendees. HebCelt 2019 will take place from July 17-20.

Ceòlas is an organization promoting Gaelic culture, music and dance based on South Uist. Barrafest is a community music festival on Barra and the Eilean Dorcha Festival on Benbecula features traditional and contemporary musicians.

The Hebrides, without a doubt, are a fantastic place to visit, not only to be astounded by the unmatched beauty of the landscapes, but also to experience Gaelic music and culture at its finest. It is fortunate that interest in preserving the old Gaelic songs and traditions is strong and continues to thrive to this day.

In the following short film, the hardship of emigration, change and the effects of the encroaching modern world are discussed in a thought provoking manner. The words are from poet Sorley McClean’s narration ‘My Island’. The music is ‘Somhairle’ by Niteworks.

2 thoughts on “Piping, Fiddling and Waulking. Music from the Hebrides Islands.”