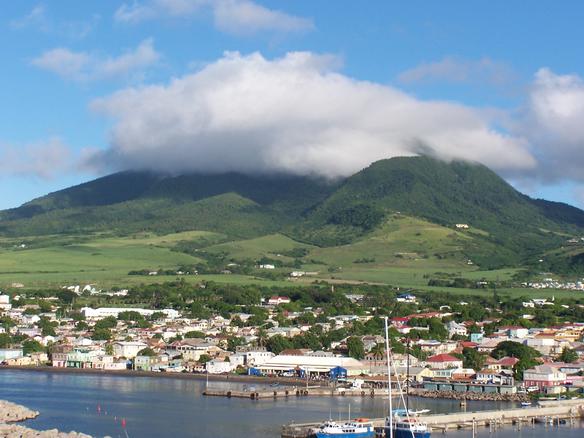 St. Kitts and Nevis, a nation of two islands in the northern Leeward Islands of the Lesser Antilles in the eastern Caribbean, is our next destination at Island Profiles. The formal name of the country is The Federation of Saint Christopher and Nevis. It is a part of the commonwealth, is English speaking and recognizes Queen Elizabeth II as head of state.

Separated by a channel called The Narrows, the islands are mountainous and of volcanic origin. St. Kitts is the larger of the two and claims the nations highest point, Mount Liamuiga which reaches 3792 feet. The beaches of St. Kitts typically have black sand, while on Nevis, they are silver. Nevis is nearly circular in shape and also has a central peak, Mt. Nevis which is often capped with white clouds. The name Nevis was derived and shortened from Nuestra Señora de las Nieves (Our Lady of the Snows). The white clouds surrounding the top of Mount Nevis apparently served as a reminder of a miraculous story of snowfall on the Esquiline Hill in Rome in the 4th Century.

The islands were first sighted by Christopher Columbus in 1493. There seem to have been numerous mapping errors which caused the names of islands to be shuffled around a bit. Columbus named St. Kitts, Sant Jago (Saint James) and Nevis, St. Martin,  but due to sloppy map making, the name St. Martin was accidentally given to another island, which today is still Saint-Martin and St. Kitts was given the name San Cristobal, which was the original name of Saba, the next island to the north. With time, San Cristobal, or St. Christopher in English, was shortened to St. Kitts. The names Liamuiga and Oualie or Dulcina were the original Carib names for St. Kitts and Nevis, meaning ‘fertile land’ and ‘land of beautiful waters’ or ‘sweet island’.

The island Anguilla was historically part of a union with St. Kitts and Nevis until 1971 when it seceded after two referendums.

Discovered by the Spanish in 1493, St. Kitts has been called ‘The Mother Colony of the West Indies’, as it was the first to be colonized by Europeans. It was settled in 1623 by the English, led by Thomas Warner and in 1625 by the French under Pierre Belain d’Esnambuc. Although the original inhabitants, the Kalinago had actually welcomed the settlers, many were massacred or fell victim to disease introduced by the settlers. St. Kitts was partitioned between English and French for some time, but by 1712 the British prevailed and the island officially fell under British control. Nevis was settled by the British in 1628. Attempts by the Spanish and the French to claim the island failed and, as with St. Kitts, the British prevailed.

The sugar industry made the islands the richest British colony in the Caribbean by the end of the 1700s. Today, it is the smallest sovereign state in the Western Hemisphere in both area and population. The population today is around 53,000 with about three quarters being Kittitians and the remaining quarter, Nevisians.

Basseterre is the capital, located on St. Kitts. The main city on Nevis is Charlestown. Besides the stunning beaches, visitors enjoy hiking Mt., Liamuiga, riding the St. Kitts scenic railway, established in the early 1900s, visiting the sugar plantations and enjoying the views  from Brimstone Fortress, known as the Gibraltar of the West Indies, from where one can expect views of six other islands. The six week long St. Kitts and Nevis Carnival, also known as Sugar Mas lasts from the end of November through early January and is an exciting introduction to the local culture. Other festivals include the St. Kitts Music Festival, held during the last week of June, and Culturama, which takes place in July/August on Nevis.

Island Profiles will continue to explore the sights, sounds, history and more of this beautiful two island nation.