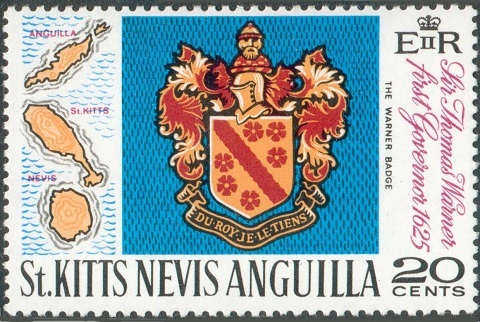 Before Christopher Columbus visited St. Kitts and Nevis on his second voyage in 1493, the islands had already been inhabited for thousands of years. Various groups may have reached the islands from Florida in the north or from South America. Some accounts tell of “Archaic” people, others, the Ciboney as being the earliest to arrive, followed by the Arawak, or Taino. The people who Columbus found when he arrived, were the Island Caribs, also known as the Kalinago, who migrated from South America, driving out the Arawak. The Island Carib language, which differs significantly from the language of the mainland Caribs, was spoken only by the men. The women spoke Arawak.

Both islands were among the first to be colonized by Europeans. A group of 15 English settlers, led by Thomas Warner, arrived at St. Kitts early in the year 1623. The Kalinago seemed friendly enough and Warner was able to start on a good note with chief Ouboutou Tegramante and begin establishing a colony. In the same year, a fierce hurricane destroyed their crops, but the colony was able to continue growing and soon the population increased when Warner brought new settlers on his ship, the Hopewell.

In 1624 a group of French settlers arrived. Led by Captain Pierre Belain d’Esnambuc, the group of 40 men had barely survived an attack by the Spanish Armada. Warner took pity on the men and agreed to let them settle on a different part of the island.  The island was eventually divided into four quarters and split between the English and French, who would fight over the island for one and a half centuries.

Meanwhile, both groups faced increasing hostility from the Kalinago and Chief Tegremante as a result of their exploitation of the island’s natural resources. In 1626, Tegremante plotted to kill the settlers, but his plans were divulged to Warner and d’Esnambuc by a native woman. The two concocted a plan to get the Kalinago drunk at a big party after which they killed 120 in their sleep. The following day, more than 2,000 were massacred at Bloody Point. By the year 1640, the Indians who survived, were either removed from the island or enslaved as plantation workers.

Nevis was settled in 1628, when Anthony Hilton, a plantation owner on St. Kitts, narrowly escaped being murdered by one of his servants. He sold his plantation, and with Warner’s permission, took 80 settlers with him to Nevis. A frequent target of attack by the French and Spanish, St.Kitts and Nevis both suffered greatly from a Spanish raid in 1629, which left the settlements destroyed. Additionally, the Spanish took 9 hostages with them to Spain as well as 600 men to work in the Spanish mines of South America.

The first major farming industry was tobacco, but with the rising success of tobacco in the North American colonies and places like Cuba, the islands turned to producing sugar from sugar cane. The islands prospered and by the mid 17th century, St. Kitts was the richest British colony. An giant earthquake and tsunami completely destroyed Jamestown, the capital of Nevis in 1690 and it was swallowed up, for the most part by the sea. Charlestown would become the new capital of the island, but continued fighting with the French and a hurricane would leave much of Nevis and its sugar industry in ruins.  In 1713 after years of fighting with the French, the Treaty of Utrecht handed the British full claim to the islands and St. Kitts’ capital was established at the town of Basseterre.

Alexander Hamilton, one of the founding fathers of the United States, was born on Nevis in 1755, and spent his early childhood there. The Bath Hotel, the first Caribbean resort hotel, was built at Bath Spring in 1778, officially establishing Nevis as a tourist destination and attracting such guests as Lord Nelson, Samuel Taylor Coleridge and Prince William Henry.

The year 1816 saw a regrouping of the Leeward Islands into two colonies. St. Kitts and Nevis, Anguilla, and the British Virgin Islands were grouped together, although each enjoyed a reasonable degree of autonomy. This division continued until 1833, when the Leeward Islands reunited. The early decades of the 1800’s saw the end of slavery, hurricanes, earthquakes and fires, all of which caused devastation to the sugar trade and a reduction in population as islanders sought better opportunities elsewhere. A cholera epidemic killed nearly 5,000 islanders during the years 1853-1854.

St. Kitts, Nevis and Anguilla remained a part of the Leeward Islands Federation until 1958, when they became a separate state. They existed as a separate country only until 1962. In 1967 they became an associated state of Great Britain, but in the same year, Anguilla voted to split from St. Kitts and Nevis. Although independence was declared as early as 1969, it was the year 1980 that  saw the successful separation of Anguilla from St. Kitts and Nevis. In 1983, St. Kitts and Nevis became a an independent constitutional monarchy with Queen Elizabeth II as its head of state.

There have been attempts by Nevis to separate from St. Kitts by referendum in 1998 and 2003, both of which did not succeed.