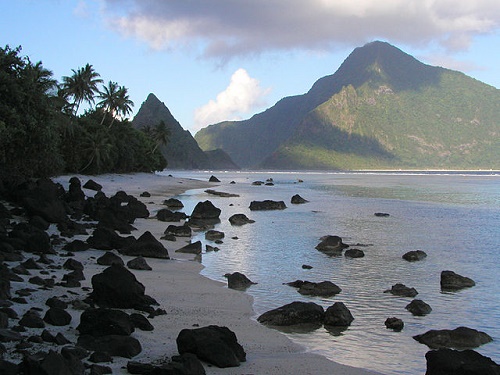 The next destination at Island Profiles is Samoa. Located south of the equator, halfway between Hawaii and New Zealand, the beautiful Samoan Islands are split between the island nation of Samoa – formerly Western Samoa, and American Samoa, which is a territory of the USA. The two Samoas share a common language, culture and history, but have been governed separately since 1900. What is even more amazing about the two Samoas, is that the International Date Line separates them. Samoa was the western most place in the western hemisphere until they decided to jump over the International Date Line in 2011. The country decided it would make economic sense to be more closely aligned with its trading partners Australia and New Zealand. This would help prevent their business partners in those countries from making business calls on Monday to Samoa only to find the devoutly religious Samoans in the middle of Sunday church services. Likewise, if Samoans tried to reach business partners in Australia or New Zealand on a Friday, they would already be enjoying their weekend. Therefore, Samoa decided to skip December 30, 2011, and the territory of American Samoa became the last place to see the sun set in the western hemisphere. This also makes it possible to celebrate any day, such as a birthday, holiday or anniversary twice by sailing or flying from Samoa to American Samoa and starting the day all over again! This, by the way, was not the first time Samoa changed over. Samoa was originally on the west side of the line, but in 1892 King Malietoa Laupepa became convinced that it would be better to be in sync with America. The change was made by repeating July 4, American Independence Day.

Besides time travel, Samoa offers much more to the visitor. The lush, tropical scenery of these volcanic islands and the simple way of life and friendly people, all contribute to an amazing and authentic Polynesian experience. Treasure Island author Robert Louis Stevenson made Samoa his home for the last five years of his life and is buried there.

Samoa was called Western Samoa until 1997, when the country decided to drop the Western part. (It turned out to be a good idea, because theoretically American Samoa later became the most western place in the western hemisphere…) The country became independent from New Zealand in 1962. Before New Zealand, this part of the island chain had been a possession of Germany since 1900.

The country of Samoa consists of two main islands. Upolu, the most populated, where the capital city Apia is located, and Savai’i, the largest island where one can find unspoiled traditional villages, a rainforest preserve, and an active volcano. There are also some small islands and islets, some of which are inhabited.

The smaller territory of American Samoa consists of the main island of Tutuila, which is approximately 18 miles long and no more than 6 miles wide, Rose Atoll, Swains Island and the small Manu’a Islands. American Samoa is the only populated American possession south of the equator. Some of the most stunning settings in the South Pacific can be found here as well as some of the world’s tallest sea cliffs. The capital city of the territory is the stunning harbor town Pago Pago.

This month, Island Profiles will explore this remote island paradise and the fascinating culture and way of life to be found there.