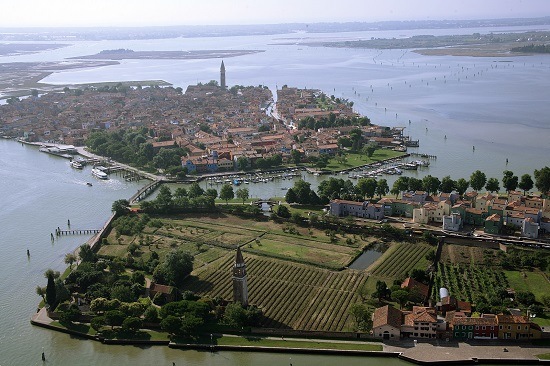 The islands of the Venetian Lagoon are an archipelago of history, art and color. In all, there are around 118 islands, covering 160 square miles.  They vary widely in size, function and population. Transportation between the major populated islands is regular and convenient by means of the water bus known as the vaporetto. There is also a plentiful amount of water taxis to be found. Cars are allowed only on the Lido di Venezia and Pellestrina. The causeway from the mainland takes motorists to the Piazzale Roma, or alternatively, to the artificial island of Tronchetto, which is a large parking garage. There is a car ferry that can transport your vehicle to Lido. The ever popular and romantic gondola is a further option of transportation within Venice. A traghetto is a gondola that primarily ferries customers back and forth across the grand canal.

Having introduced the historic center of Venice in our first post, let’s turn our attention to some of the other islands and what there is to discover as we travel outwards across the waters of the Venetian Lagoon.

Venice’s largest island is Sant’ Erasmo. It is known as the garden of Venice and is famous for its violet artichokes, vegetables and fruits which make their way to the tables of Venice. It is quite a different scene from the crowds and congestion of the historical center. Here you can expect to find a quiet, serene setting with many trails for riding bikes and stunning views of the nearby islands. There is an artichoke festival in May and a boat regatta in June. The Church of Cristo Re and a fortified tower, the Torre Massimiliana, are the main landmarks of the island.

Famed for its glassmaking, and closest to the historical center, Murano is easy to reach by vaporetto. Here the main attraction is Murano’s  much prized glassware. A visit should include a glassblowing demonstration at the Museo del Vetro museum or one of the many shops or factories on the island. Like the historic center of Venice, Murano is actually a group of islands linked together by bridges over narrow channels. There are shops, restaurants and accommodations here as well as two historic churches worth exploring.  The Basilica di Santa Maria e San Donato, though rebuilt many times, has its origins in the 7th century. The large ribs behind the altar are either from a dragon that San Donato slew or from a large plesiosaur. The interior of the church of Santa Maria degli Angeli hides stunning frescoes behind a somewhat bland facade.

The islands of Burano, along with its connecting island Mazzorbo, and Torcello are where the true roots of Venice are to be found. A fishing island whose multicolored dwellings elevate its status to one of the most colorful towns in the world, it is famed for its lacemaking tradition. Visitors will find Burano lace in all the shops as they stroll through the rainbow colored alleys of this vibrant island.

A wooden footbridge connects Burano to the small island of Mazzorbo. Here you will find a community of about 350 inhabitants, a 13th century bell tower, artichoke fields and a secret vineyard which produces wine from the rare and almost forgotten Dorona grape. The Venissa wine resort has  well appointed rooms and a Michelin star restaurant, that promise a unique and unforgettable experience off the beaten path.

Torcello is green, quiet and peaceful and is the location of the oldest settlement in the Venetian Lagoon. Settled in 452AD, it now feels deserted, with only a handful of permanent inhabitants. The island’s highlights include The Cathedral of Santa Maria Assunta, built in 639AD which houses a 12th century Byzantine mosaic of The Last Judgement, a stone seat in the square known as Attila’s Throne, and a stone bridge known as the Devil’s Bridge which has no railings and which according to legend, was the place where a young girl made a pact with the devil in order to bring back her lover from the dead.

The Lido of Venice is a 7 mile long barrier island. Famous as the location of the Venice Film Festival, it is also known as the beach of Venice. A noticeable change from the rest of Venice is the presence of regular streets and cars. On the northern end of the island is the main settlement, called Lido. Here you will find grand, hotels, shops, restaurants and large sandy beaches, both public and private. The beautiful 19th century Art Nouveau villas date back to the 19th century when Lido di Venezia was developed as a seaside resort. The main street of Lido, the Viale Santa Maria Elisabetta, better known as the Gran Viale, crosses the island from the vaporetto terminal to the seaside beach. Landmarks include the Grand Hotel de Bains, the setting for Thomas Mann’s novel Death in Venice, the Tempio Votivo Church, a war memorial built between 1925 and 1935,  commemorating the war dead and Venice’s survival of WWII without significant damage and the church and monastery of

Towards the southern end of the island is the pretty village of Malamocco. It is older and quieter than the more developed part of the island and makes for a great escape from the crowds.

Even more removed from the crowds is the other barrier island to the south of Lido, Pellestrina. Here you can find pine forest, birdlife and four quaint villages with colorfully painted houses.

Only accessible by private transport, this small island is the site of a 13th century Franciscan monastery. St. Francis of Assisi spent time there in the year 1220. Tours are offered by the Friars for those interested in visiting this historic religious site.

For the ultimate escape, organize a stay at the family owned and eco-sustainable private resort island, Santa Cristina. Only 30 minutes away from Venice by water taxi, the hotel offers luxury accommodations. The island has fishing ponds and vineyards and is populated by peacocks, flamingos and pheasants.

By request, you can stop at the Lazaretto Nuovo on the number 13 ferry to St. Erasmo. The island was established in 1468 during the black plague as a quarantine station for incoming ships. The ships’ crew and cargo would be quarantined and examined for signs of sickness or contamination. The island was later fortified with towers and became a checkpoint, fortress and gunpowder warehouse. Today, there are museums on the island whose fascinating exhibits display military and plague artifacts.

The location of Venice’s first renaissance church, the Chiesa di San Michele in Isola and a monastery, this popular way station for fishermen was converted into a cemetery in 1807. Bodies were transported to the island on special funeral gondolas and many important figures are buried here. Along with many other notable figures, you can find the graves of composer Igor Stravinsky, poet Ezra Pound and founder of the Russian ballet, Sergei Diaghilev.

Separated from the main part of Venice by Giudecca Canal, Giudecca was primarily a place known for palaces and gardens until industrial development began in the 20th century. At the eastern tip, on its own little island, is the church of San Giorgio Maggiore, which was made immortal artist Claude Monet. The island is primarily residential now, but is also known for the Il Redentore, which dominates the island. This imposing structure contains important paintings by several artists including Tintoretto. Giudecca is also the location of the famed luxury Belmont Hotel Cipriani, considered one of the leading luxury hotels in the world.

Few places can match the Venetian Lagoon in terms of sights, history, glamour, color and culture. Without question, there is something for everyone in this amazing place.