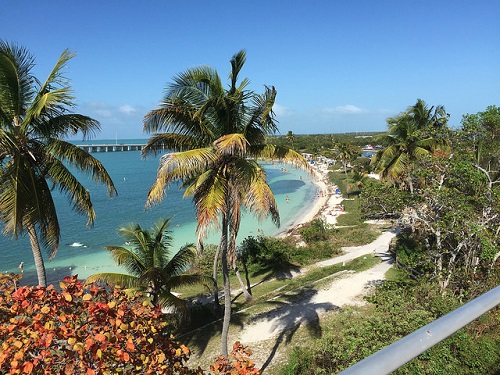 Unless you fly into Key West International Airport, or arrive by boat, part of the adventure of visiting Key West will be the drive over the numerous bridges of the Overseas Highway, otherwise known as U.S. Route 1. It will take up to two hours to reach Key West from the mainland on this 113 mile stretch of highway.

Once you have arrived, there is an extensive list of activities to keep you entertained, whether it be the night life, history, natural beauty or beach and water activities that brought you here.

The sunset celebration is a daily occurrence at Mallory Square, located at the northwest end of Key West. Street performers and food vendors add to the fun as crowds gather to watch the sun set into the Gulf of Mexico horizon. While you are there, check out the Key West Historic Memorial Sculpture Garden where 36 bronze statues of famous Key West residents such as Ernest Hemingway and Harry Truman are immortalized.

The main artery through Key West is the famed Duval Street. Restaurants, bars and every kind of shop line this lively street, serviced by the “Hop On Hop Off” Old

Town Trolley. Along with renting a bicycle, the trolley is probably the best way to see the town and get around without the hassle of parking. Tickets are valid for the whole day, so you can get on and off at will to visit attractions like the Ripley’s Believe It or Not Odditorium and Wax Museum, or to grab a drink at one of Hemingway’s favorite watering holes, such as Sloppy Joe’s or Captain Tony’s Saloon. Sloppy Joe’s, which Hemingway helped name, is known for its annual Hemingway look alike contest held every July. Celebrity Chef Paula Deen’s husband Michael Groover won last year’s contest on his ninth try.

The Hemingway House is also a favorite attraction on the island. See where Hemingway lived and worked from 1931-1939. In this house Hemingway wrote “The Snows of Kilimanjaro”, “To Have and Have Not” and “Green Hills of Africa”, among others. The grounds are populated by six-toed cats, which are descended from Hemingway’s cats.

Another famous house is the “Little White House”.  Although it is most famous for being the winter retreat of President Harry Truman who stayed there 11 times, Presidents Taft, Kennedy, Carter and Clinton as well as Thomas Edison have all stayed there. The house and botanical gardens are open to tourists and feature tours with excellent guides for those interested in its rich history.

Fort Zachary Taylor, built in 1845, is another historical site worth visiting. It has the largest collection of Civil War armaments and cannons in the US. The building and brickwork alone are worth seeing, not to mention the surrounding park with its nature trails, picnic areas, and one of the nicest sand beaches on the island. It is the site of Civil War reenactments and is transformed into a haunted fort every Halloween.


The Key West Lighthouse was built in 1825 and is the 15th oldest lighthouse in the US.  Climbing the 88 steps will be rewarded with great views of the entire island. At the Keeper’s House Museum, you can learn more about the history of the lighthouse and the lives of the lighthouse keepers.

The Key West Shipwreck Treasure Museum also has a lookout tower. The museum, which features actors, films and exhibits, explores the nautical and maritime heritage of the keys. Another museum option is the Mel Fisher Maritime Museum which explores famous treasure hunter Mel Fisher’s discovery of the Spanish Galleon Nuestra Señora de Atocha, which sank in 1622. There is a pirate exhibit in addition to the artifacts and exhibits relating to the wreck.

To actually go to a wreck, you can visit the Vandenberg wreck. This 522 foot WWII transport ship was purposefully sunk and is one of the best wreck dive sites in the US.

Other attractions on Key West include the Key West Aquarium, Audubon House and Tropical Gardens, and the Butterfly and Nature Conservatory. There is a popular “Ghosts and Gravestones” tour. If you are a morning person, the White Street Pier is the place to watch the sunrise. When its time to get some sun or cool off in the water, Smathers Beach, on the south side, is a half mile white sand beach where you can rent water sports gear, kayaks and more.

The Dry Tortugas are a group of small islands and reefs located 70 miles west of Key West. Built between 1846 and 1875 to protect a valuable shipping route, Fort Jefferson was used as a prison during the Civil War. It is the third largest fort in the US and housed nearly 2,000 people at one time. There are guided tours of the fort and lighthouse  available, which last 45 minutes to an hour. Self-guided tours can also be downloaded on your phone or tablet. Camping is permitted and the shallow waters offer excellent beaches and snorkeling. The islands are reachable by a daily ferry from Key West.

One of the most popular attractions of the Florida Keys is the John Pennekamp State Park. Located at Key Largo, it was the first underwater park in the United States. Spread over 70 nautical square miles, the main attractions are the coral reefs and rich marine life, accessible by glass-bottom boat, snorkeling or scuba diving. A definite highlight is the Christ of the Abyss statue, a 4,000 pound, 8 1/2 foot statue which was donated to the Underwater Society of America by Italian scuba diver and entrepreneur Egidio Cressi, which was placed underwater in its current location in 1965. This is a bronze copy from the original mold. The first statue cast is located underwater in the Mediterranean Sea off the coast of the Italian Riviera.  A Catholic Church on Key Largo commissioned yet another replica which can be seen by non divers. It is located in front of the sanctuary of St. Justin’s Martyr Catholic Church on US 1.

The Keys are home to many nature and marine parks. Some of the most popular are the Theater of the Sea on Islamorada, where you can swim with dolphins sea lions and stingrays. There are marine performances and glass bottom boat tours. The Laura Quinn Wild Bird Sanctuary on Key Largo features owls, pelicans, hawks and more. Grassy Key is home to the Dolphin Research Center, where you will find 90,000 square feet of lagoons with dolphins and sea lions which were either bred in captivity or rehabilitated. The National Key Deer Refuge on Big Pine Key harbors Key Deer which are the size of a large dog when fully grown. Blue Pine Key is also the location of the Blue Water Hole, a former quarry where you can see sea turtles and alligators. The Turtle Hospital in Marathon rescues and offers treatment to stranded and injured turtles and features 90 minute tours.

Islamorada is known as the sport fishing capital of the world and has the highest density of fishing charter boats anywhere. In English, Islamorada is the Purple Island, but is actually made up of a group of small islands. Besides fishing boat charters, you will find a shopping mall at the Bayside Marina which has a replica of Hemingway’s fishing boat, the Pilar, named after his wife. There are also many excellent dining options.

Marathon is a community spread over several keys. There is a wide offering of seafood restaurants and there are plentiful shopping, hotel  and sport fishing options. It is located on the east end of the seven mile bridge.

Bahia Honda State Park in the lower keys has the nicest beach in the keys and possibly one of the most beautiful in Florida. This is the place to go for hiking and camping and there is also excellent snorkeling.

If you are a registered scuba diver and would like to sleep in and underwater hotel, check out the Jules Undersea Lodge at Key Largo. You can even get pizza delivery to your underwater lodgings!

Whether its the night life of Key West, a tranquil resort, or fun family activities, the Florida Keys offers something for everyone.