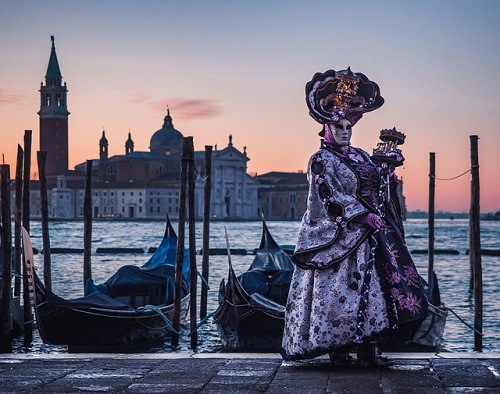 Called “undoubtedly the most beautiful city built by man” by the New York Times, our next destination at Island Profiles is built on over 100 small islands in the northwestern part of the Adriatic Sea. Once the center of a sprawling maritime republic, Venice (Venezia in Italian) is a city of canals, gondolas, bridges, marble palaces, frescoes, domes and towers. Among the many names that have been given to this remarkable city, Queen of the Adriatic, City of Masks, City of Canals and La serenissima or ‘most serene’ are among the most commonly heard.

The Republic of Venice was a major power between 697 and 1797. It was an important center of the Renaissance and figures prominently in literature, music and art. Venice was home to Marco Polo (the Venice airport is named after him), Giacomo Casanova and Antonio Vivaldi and captured the imaginations of William Shakespeare, Thomas Mann, Henry James, Ezra Pound and Anne Rice, to name only a few.

The founding of Venice is difficult to determine, but is often associated with the dedication of the San Giacomo church, which took place at noon on March 25, 421AD. There were thought to be fisherman or ‘lagoon dwellers’ in the area, but much of the original population were refugees from Roman cities fleeing foreign invaders. Venice began to gain in wealth and prominence in the 9th through 14th centuries, becoming an important hub of commerce, a major power and perhaps the first international financial center.

The cities architecture reflects a variety of influences, including Byzantine, Gothic and Moorish styles. Many buildings date from the Renaissance period of the late 15th century and the Baroque period of the 17th century, strongly reflecting the periods’ styles in the architecture. There are no roads in the historical center, (the city extends to the mainland), only narrow streets and canals connected by over 400 bridges. The S-shaped Grand Canal weaves its way through the center of the city. It is distinguished by four bridges, the most spectacular being the Rialto Bridge.

The living structures and palaces typically have mostly storerooms and offices on the water level, while the living area is located on the floor above, known as the piano nobile. Painted mooring posts and all manner of watercraft, including vaporetti (public transport water buses), barges carrying fruits and vegetables or garbage, police and ambulance boats and, of course, the iconic Venetian gondolas, fill the canals with life and color.

The Piazza San Marco is the main square in Venice’s center. Napoleon called it “the drawing room of Europe” and it is a busy and popular meeting place for locals and visitors to the city. The ducal palace, bell tower (campanile), Saint Mark’s Basilica, museums and lots of outdoor cafés distinguish this stunning space. The city is often flooded due to high tides combined with strong winds. When this happens, the city puts out raised platforms for pedestrians in the square.

The symbol of Venice is a winged lion, representing patron saint St. Mark, the Evangelist and associated with power, strength and courage. The symbol adorns doors and facades of Venice’s palaces and is represented on the Venetian flag. There is an impressive bronze sculpture of the lion at the Piazza San Marco.

The lagoon in which Venice and its islands are located is protected by sandbanks called lidi, with gaps for maritime traffic, the most famous of these being the Lido, which hosts the Venice International Film Festival each summer. Other major islands include San Michele, famous for its cemeteries, Murano, well known for its glass making which dates back to the 13th century, the colorful Burano, Torcello and Sant’ Erasmo.

As one of the world’s oldest tourist and cultural centers, Venice is often crowded with visitors. It is busiest during summer and during the world famous carnival, which takes place at the end of February and beginning of March. It can be a very busy place, although the historical center’s population is only about 55,000 (The entire Comune of Venice, which includes all the islands and the mainland portion of the city, is around 270,000).

There is so much to explore and learn in regards to this incredible island city.  I very much look forward to our journey through the history, culture and sights of this unique, beautiful and magnificent place.