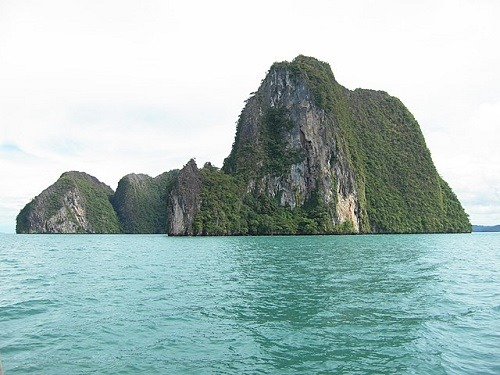 Next, we go completely in the opposite direction and explore one of the least visited places on earth – Myanmar’s Mergui Archipelago. This group of about 800 islands in the Andaman Sea, off the southernmost coast of Myanmar has been called ‘earth’s last paradise’, ‘the lost world’ and ‘the jewel of Burma’. Mergui is the name the islands were known under during British colonial rule, and is generally the name used when referring to the islands. Myeik is the Burmese name. They have also been referred to as the Pasha Islands, Pasha being a name which refers to the Malay inhabitants of the islands.

Unlike most of the destinations we have explored, these islands are largely uninhabited. They were opened to tourism in 1997. Tourists, however, need special permits to visit the islands and independent travel is not permitted.

A few of the islands are home to the Moken people, who are often known as sea gypsies because most of them live on boats. The Moken have, however, established some villages and many will retreat to land during the rainy monsoon season.

The Mergui islands have much to offer those who are adventurous enough to travel this far off the beaten path. Image perfect palm fringed white sand beaches that are completely empty and quiet, dense unexplored jungle and spectacular coral reefs for unequaled diving experiences. Add to that the diverse wildlife, bird life and marine life, encountering the culture of the fascinating Moken people and the thrill of exploring a ‘lost world’ by hiking or kayaking the rivers of the islands and you have an unforgettable experience.

There are many questions about the origin of the Moken and when they settled in the Mergui Archipelago. They are of Austronesian origin and may have migrated from southern China in the direction of Burma and Thailand as long as 4,000 years ago. Maybe earlier. As to why they adopted their nomadic life on the sea, there seem to also be different theories. Rising sea levels and the threat of pirate attacks have been suggested. In any case, these sea nomads have been living their life on the Andaman Sea for centuries and today are among the very last remaining sea gypsies in existence.

The Moken do not have a written language and they do not speak the same language as the Burmese on the mainland. They have consistently resisted integration and fought back when the Myanmar government tried to settle them into a national park as a tourist attraction. Historically, the sea pirates that were known to frequent the region left them alone for the most part as they did not have many possessions for the pirates to plunder.

The Moken are known for their ability to breathe underwater much longer than ordinary humans and to have incredibly keen eyesight, probably also due to the extreme amounts of time spent under the water.

The Moken have their own animalistic religion. In the second week of February each year, the largest festival celebrating their religion takes place. There is much dancing and singing, a regatta and rituals during which the Moken call upon  their ancestors. Totems called spirit poles are used for this purpose. Bonfires are built and during the full moon, to the sound of drums made from monitor lizard skins, offerings are sacrificed to the ancestors. Besides animal sacrifice, these gifts include items such as alcohol, betel nuts and even cans of soda and popcorn. Turtles figure prominently in the religious ceremonies of the Moken. To the Moken, they are a symbol of the life-giving femininity of the sea. During rituals the Shaman will taste the blood, head and flippers of a freshly harpooned turtle.

The Moken are generally a peaceful but shy people. They try to avoid contact with outsiders, and have been known to  flee at the sound of motorboats. They have avoided technology and modern life for the most part, but with the establishment of settlements, life is beginning to change for them. Schools, electricity and television have slowly become a part of their lives.

Myanmar, which until 1989 was known as Burma, has at least 135 different ethnic groups although the Burman or Bamar group accounts for about two thirds of the population. It is a fascinating country with a long history dating back many centuries BC. The Anglo-Burmese Wars of 1824-25 led to British colonial rule. Burma became a province of India at that time and remained so until 1937. Much of Burmese history is colored by civil wars between the many different ethnic groups. Burma became independent in 1948, which only led to more internal conflict. Military rule was set in place for much of the period between 1962 and 2010. Under these circumstances, Burma became one of the world’s least developed nations. Under President Ne Win’s socialist one party system, Burma existed in virtual isolation. The Boxing Day  tsunami of 2004 and Cyclone Nargis in 2008 devastated the country and UN  aid efforts were delayed by the isolationist regime. In 2016, Burma, now Myanmar, welcomed its first non military president since 1962, a sign of hope that democracy is slowly overcoming the many obstacles this remarkable land faces.

In 1997, the islands of the Mergui Archipelago were officially opened to tourism. At the same time, a logging ban was put in place by the government. This ban resulted in a major change to the way of life of the Moken and their livelihood as pearl fishers as they were no longer able to build new boats.

Tourism and foreign investment are now on the rise. It is likely that the near future will see the islands dotted with super yachts and luxury resorts. As of this writing, special permits are required to visit the islands on one of the guided boat tours, which depart from Kawthoung or Myeik on mainland Myanmar or from Ranong in Thailand.