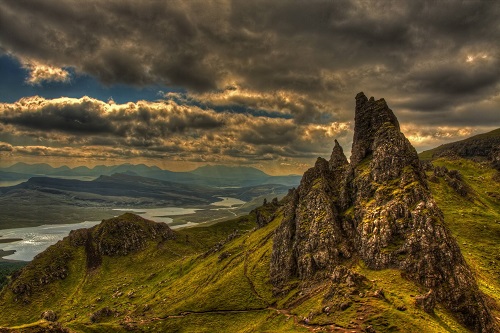 The Inner Hebrides are a group of islands close to the west coast of Scotland. Although they only have a combined population of around 20,000 inhabitants, the islands are nevertheless incredibly rich in history, scenery and Gaelic tradition. There are two groups of islands that form the Inner Hebrides. The northern group is dominated by Skye, the largest of the Hebrides, as well as several smaller islands. The southern group includes the islands of Islay, Jura, Mull, Coll, Tiree and Iona. These beautiful and rugged islands offer many amazing sights and have inspired writers, musicians and artists through the ages.

To start with, lets explore the spectacular Isle of Skye, the  second largest and most populous of the Hebrides. Skye is distinguished by a mountainous interior, with numerous peninsulas reaching outwards. The length of the island is somewhere between 50 and 60 miles. Its rugged beauty combined with accessibility by way of a bridge to the mainland have put Skye at the top of the list of popular tourist destinations. Skye, and the Hebrides in general, have a fascinating history. There are traces of mesolithic inhabitants as far back as the 7th millennium BC. Pictish stones and relics have been discovered from the Iron Age. After 300 years of Norse rule, Skye fell under the rule of various clans. Flora MacDonald, a descendant of one of these clans is famous for helping Bonnie Prince Charles escape to Skye after his attempt to regain the throne for the Stewart family in the Jacobite rising of 1745. She dressed him as her maid and escaped with him in a small boat. The MacDonalds, along with the MacLeod, Mackinnon, MacNeacail and MacInnes clans built numerous castles and monuments when they were not fighting with each other. Dunvegan Castle, the stronghold of the MacLeods, is among the most imposing. Although still a residence of MacLeod descendants, it is still possible to visit and tour the castle, exploring its extensive art, intriguing history and clan treasures, such as the magical Fairy Flag.

The Fairy Flag, which is said to have been a gift from fairies to the clan, brings up the subject of these magical folk, who figure prominently in to the island’s folklore and any tourist visit. Visitors will want to visit the otherworldly Fairy Glen, a volcanic landscape covered with intense green moss, and the Fairy Pools which is a series of waterfalls and clear pools easily explored by a scenic footpath.

Less easy to hike are the Cuillins, a mountainous ridge on the southern part of Skye, which promise dramatic views and great hiking trails for the more adventurous. The Quiraing is another amazing hike. It is a four mile trail which provides access to some of the most stunning scenery on the island, including views of curious cliff and rock formations as well as of nearby islands. Neist Point, with its lighthouse, is located on the western coast and is a popular place to catch memorable sunsets.

The Trotternish Peninsula in the north is likewise incredibly scenic. Hikers will want to allow at least a half day to explore the geological wonders of the peninsula, which include the Sanctuary, the  46 meter high Old Man of Storr, Kilt Rock, a perilously high sea cliff resembling a kilt, Mealt Waterfall, and the haunted ruins of Duntulm Castle.

Armadale Castle, with its gardens and award winning Museum of the Isles, is the ancestral home of the MacDonald Clan. The castle is no longer inhabited, but the ruins are well worth a visit.

Skye’s award winning Talisker Distillery, founded in 1830, was a favorite of Robert Louis Stevenson. Whether you appreciate whisky or not, the distillery is a fascinating experience and is located on a beautiful bay.

There are numerous picturesqe villages strewn throughout the island. The largest town is the attractive Portree, which is also the island’s capital. Cafes, restaurants, shops and more, make this lovely town an excellent base for your visit.

Islay, pronounced Eye-la, is the southernmost of the Inner Hebrides and is often called the ‘Queen of the Hebrides’. The island is distinguished by miles of beautiful beaches, moorlands, woods, machair – the unique grassy low plains colored with vibrant, colorful flowers, which is a rare habitat found only in Scotland and Ireland, a rugged coast and beautiful freshwater lochs. Already settled in neolithic times, Islay has plenty of archeological sites. Explore the 15th century gravestones and see the Kildalton High Cross, one of the finest examples of a Celtic Cross, thought to be carved around 800 AD.

Islay is probably most well known as being the destination for Scotch whisky lovers. Its Whisky Trail boasts 8 distilleries whose products are appreciated world wide. Ardbeg, Lagavulin and Bowmore are perhaps the most recognizable and prounounceable names. The very peaty Laphroaig has long been one of my favorites. A trip to Islay would, of course, not be complete without a distillery tour and tasting. The Islay Festival of Malt and Music takes place each year in May/June and features traditional music, whisky tasting and fun and educational activities.

Port Ellen is the largest town and most active port on the island. There are standing stones, castle ruins and archeological sites in the area nearby. Bowmore is the official capitol of the island and is known for its distillery and the all round Kilarrow Parish church. The prettiest town on the island is likely Port Charlotte. This town of painted white houses is the location of the Museum of Islay Life. The Gruinart Nature Reserve in the northwest part of the island is one of the most beautiful areas. It features a working farm, migrating barnacle and brent geese, eagles and other birds of prey. The barnacle geese arrive from Greenland in the third week of October then fly back in the spring. There is a visitor center and guided walks in the summer months.

There is plenty to see and do on the mountainous island of Mull. With a population of just around 2,800 inhabitants, the island is nevertheless rich in history and full of interesting sites.  A stone circle, brochs – ancient round stone forts dating back to the first centuries BC and AD, menhirs – prehistoric standing stones and the restored 13th century Duart Castle are among the sites to see. The castle, which was built by the MacDougall Clan but later claimed by Clan Maclean as part of a dowry in 1350,  is rich with history, changing hands several times before being abandoned in 1751. It was purchased again by the Maclean Clan in 1911 and restored. The castle has been featured in the movie Entrapment, featuring Sean Connery, a Maclean descendent and in the Buffy the Vampire series.

The colorful capital and main town of Tobermory is home to a distillery. It also has what Guinness Book of World Records calls the smallest professional theater, the Mull Theatre. Visitors flock to Mull in order to encounter the rich bird life, including white-tailed eagles and the sea life which offers minke whales, porpoises and dolphins. There is also a large population of otters. The highest point on this rugged island is Ben More, which reaches 3,169 feet. There are numerous peninsulas along the coast and small towns are scattered across the island.

Among the small islands that encircle Mull is Staffa, the location of the famous Fingal’s Cave. The island has been uninhabited since 1800, but the cave has captured the imagination of  such notable persons as Jules Verne, William Wordsworth, John Keats, Alfred, Lord Tennyson, August Strindberg, Sir Walter Scott,  painter J. M. W. Turner, composer Felix Mendelssohn and even Queen Victoria.  The cave has a large arched entrance, is formed from hexagonal columns, is partly filled with water and known for its natural acoustics. Sightseeing tours typically pass by the cave, but in still weather, it can be explored by foot.

One mile off the  west coast of Mull is the Isle of Iona. In 563 a monastery was established on the island by St. Columba, an Irish monk who is said to have successfully converted the inhabitants of present day Scotland to Christianity. Iona became a center for ‘Celtic Christianity’ and was a center of learning until it was plundered by a series of Viking attacks beginning around 794 AD. Many Celtic crosses, including the 9th century St. Martin’s Cross and the 15th century McClean’s cross were sculpted on the island, which may be where the Celtic cross with the ring around the intersection was first designed. In 1203, a Benedictine Abbey and Augustinian nunnery were constructed on the site of the original monastery. It is one of the oldest religious institutions in all of Western Europe. The ‘Street of the Dead’ is a 13th century red granite street leading to the convent on which kings were carried for burial. Oran’s Cemetery holds the remains of 48 Scottish, 8 Norwegian and 4 Irish Kings. The island is to this day a center of Christian pilgrimage receiving as many as 250,000 visitors a year. The treeless and atmospheric island is only three miles long. The main town is Baile Mòr and the shores are graced with shell and colored pebble beaches.

The most westerly of the Inner Hebrides is Tiree. Because it is sunnier than most of the rest of the UK and known for windsurfing, it is fondly referred to as the “Hawaii of the North”. Tiree has the highest percentage of Gaelic speakers, has an established music festival, and is home to the 1st century AD Dùn Mòr broch. The main village is Scarinish which has one bank, one hotel and a post office.

The stunning natural scenery of Jura includes lakes, woodlands, bogs, heather, grassland, mountains, cliffs bays and beaches. The west coast is rugged, desolate and frequently battered by fierce winter gales. With a population of around 200, the numerous red deer outnumber the humans on the island by thirty to one. The west side of the island has three mountain peaks known as the Paps of Jura. The main village, which lies on the east coast is Craighouse, which is home to the Jura Distillery, a hotel, restaurant, school, church, village hall and a couple shops.

It is on Jura that Eric Blair, more commonly known by his pen name George Orwell, lived much of the last four years of his life in a remote farmhouse on the north end of the island. Orwell penned his famous novel 1984 while living here. Of the coast of Jura is the Corryvreckan, the third largest whirlpool in the world. Orwell nearly lost his life there during a boating excursion. Unfortunately, not too long afterward Orwell succumbed to tuberculosis at age 46 on January 21, 1950.

Breacachadh Castle, restored in the 1960s, belonged to the Maclean Clan and was built in the 14th century. Nearby is a newer castle built in 1750 which goes by the same name. The island is small, has some nice sandy beaches and a few towns. The main settlement is Arinagour. There are no street lights on the island and it was the second destination in Scotland to secure ‘dark skies’ status, which allows for clear night sky views without light interference. The Northern Lights are also visible in winter.

Other smaller islands of the Inner Hebrides include Rhum, which has a nature preserve and Raasay, where castle ruins and remains of a broch can be found.

2 thoughts on “The Inner Hebrides”