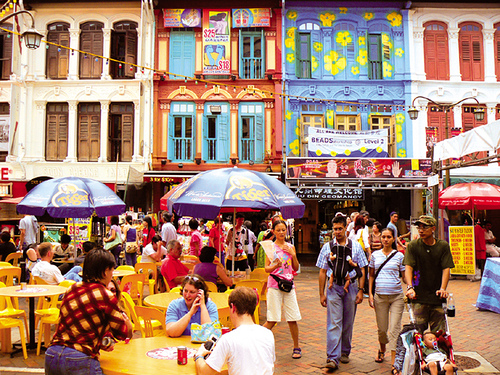 Singapore offers an exhilarating array of experiences and attractions. Museums, colonial and ultra modern architecture, ethnic neighborhoods bustling with hawker food stalls, spice vendors, temples and shrines, world class shopping and incomparable night life are all within reach  in this unique island city of five and a half million inhabitants.

Ethnic Chinese make up the largest percentage of Singapore’s population, so we will start with Chinatown. Located adjacent to the CBD, or Central Business, Chinatown has neighborhoods that date back to the 1820’s when the area was designated by the Raffles Plan as a community for Chinese immigrants.

Today, it is less of an enclave, as the Chinese population grew and dispersed throughout the island, but offers much to see and experience.

Besides the sensory experience of the numerous wet markets, hawker food stalls, and shophouses, top attractions include the Buddha Tooth Relic Temple, a stunning Buddhist Temple built in 2007. It is fully air conditioned and boasts an ornate interior and rooftop garden.  The oldest Chinese temple in the city is the Thian Hock Keng Temple- the Temple of Heavenly Happiness.  As with all of the other ethnic neighborhoods, Chinatown has a Heritage Center, where exhibits detail the history and culture of the Chinese community.

If that makes you hungry, visit Lau Pa Sat, for what some say is the best hawker food center in the city, located  in the largest Victorian cast-iron building in Asia.

Colorful and brash, Little India, known as Tekka to the local community, is not the original Indian, or Tamil community created under the Raffles Plan, but an area that developed when the original area of Chulia Kampong became overcrowded and ethnic Tamils moved to the area.

Visit the Indian Heritage Center as well as the Sungei Road Thieves Market, where a chaotic array of random items like laptops and cassette tapes reside side by side with real treasures and rarities. Spicy eateries, Indian produce shops, vendors of spices and traditional clothing complete the picture.

In the Malayan district of Kampong Glam, named after the Glam tree, you will find the Sultan Mosque, built in the Saracenic style and the largest in Singapore, the Malay Heritage Center, Malaysian and Arab coffee shops, bakeries and restaurants. Art galleries and curio shops dot the neighborhood which was formerly designated for Sultan Hussein and his family as well as the Arab, Muslim and Malay communities.

Here you will find 19th century architecture, with heritage sites such as the world famous Raffles Hotel, dating from 1887. This historic hotel features a Sikh doorman, tropical gardens, galleries and boutiques as well as the Long Bar where the Singapore Sling cocktail was created.

The headquarters of British Malaya were located in this area and the City Hall, cathedrals and many shops date from colonial times.

A visit to the National Museum easily merits a  2 day visit.  The Asian Civilizations Museum features 3 levels of Pan Asian exhibits in an impressive building dating from the 1860’s. The Oldest surviving government building is the Arts House, which is located next to the Victoria Theatre and Concert Hall, originally built as the Town Hall, and now home to the Singapore Symphony Orchestra.

Singapore’s economic boom has produced some impressive new attractions, from the Singapore Flyer, one of the world’s largest observation wheels to the ultra modern architecture of the Marine Bay Sands, where you will find celebrity chef restaurants, the rooftop infinity pool, casino and of course, more shopping.

Gardens by the Bay, an unforgettably designed botanical park, features a flower dome, cloud forest, skyway and a sound and light show.

The Singapore Zoo and River Safari is one of the newest and best zoos in the world.

On the same note, the Jurong Bird Park features 380 species and about 5,000 birds.

The list goes on and on. A vibrant, thriving city like Singapore is inevitably going to offer something new with each passing day.