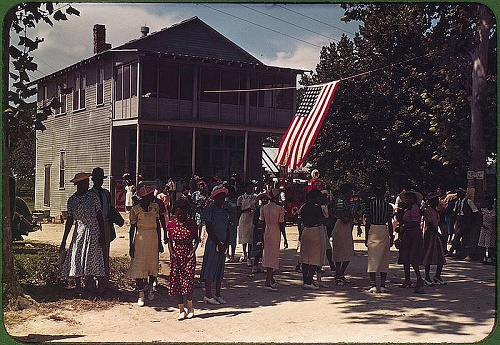 If you go to the city market in Charleston, South Carolina on any given day, it is likely that you will notice women selling or making sweetgrass baskets. You may also find them on King Street or elsewhere in town sitting on folding chairs, displaying their beautiful baskets on blankets on the sidewalk. These baskets are a tradition of the Gullah culture. The men and women who weave them also harvest the grass and dry it as they have for hundreds of years.

The word Gullah is thought by some to be derived from Angola, the country on Africa’s west coast. It is also possible, according to others, that it comes from the Gola ethnic group that lives on the Sierra Leone/Liberia border or the Spanish name for the region, Guale, which referenced a native American tribe of the region.  The designation Gullah often includes all of the people descended from freed African slaves who labored on the rice, cotton and indigo plantations of the South Carolina and Georgia islands and low country coast. Alternatively, it is applied to only those from South Carolina, and Geechee is used to describe those living in the Georgia coastal areas. Furthermore, Geechee are designated either ‘freshwater’ or ‘saltwater’ Geechee, depending on whether they live on the mainland or on one of the islands. Geechee is also a term of uncertain origin. It is related to the either the Ogeechee River near Savannah or the Kissi ethnic group from the Sierra Leone/Guinea/Liberia border, or both.

The language of the Gullah, which is still spoken by approximately 200,000 people, is around 300 years old and has its own grammar, idioms, phonology and a large vocabulary derived from both English and African sources.  It has elements in common with the Krio language of Sierra Leone, and Bahamian and Belizean Creole.

The first English speaking settlements in South Carolina and Georgia were established in 1670. It was not long after that that the importing of slaves from Africa began. Savannah, and especially Charleston, were major centers of the slave trade, importing them primarily out of Bunce Island, a British ‘slave castle’ or trading post, located in the Sierra Leone River, near the capital city of Freetown. The sea islands and marshes of the mainland’s ‘low country’ were well suited to the cultivation of rice, as well as cotton and indigo. A large majority of the slaves imported from Bunce Island came from a tradition of rice growing and the coastline of West Africa around Sierra Leone was known as the ‘rice coast’ of Africa. Records also show, however, that as many as 40 percent of the slaves came from Angola. Many plantations were established on the islands and in the low country of South Carolina and Georgia and thousands of acres were turned into rice fields.

The Africans brought diseases such as malaria and yellow fever with them, to which they were largely immune.  Many white plantation owners left during spring and summer to escape being infected. This allowed the culture of the African slaves on the islands to develop in relative isolation and much more intensely than on the mainland or in other colonies, such as North Carolina or Virginia.

With the onset of the Civil War, the white plantation owners fled. The Union Navy and Army occupied the islands in 1861 in an attempt to block Confederate ships. There were many Gullah who served in the Union Army and the islands were the first area where slaves were freed.

In 1862, Unitarian missionaries from Pennsylvania arrived and set up schools for the freed slaves.  The Penn Center on St. Helena Island is a popular attraction today and was the first school established for freed slaves.

After the Civil War, the Gullah and Geechee became even more isolated than before. The lack of labor caused most plantation owners to leave, abandoning their property, and the former slaves were left alone in remote areas with little outside influence.  A series of devastating hurricanes also made their mark, including the Sea Islands Hurricane on August 27, 1893, which took lives in the thousands, and caused extensive damage.

In the 1950s, major changes took place with the construction of bridges linking some of the islands to the mainland. Hilton Head Island was the first island to see major development. The innovation of air conditioning helped to make the area much more enticing to outsiders, including the affluent in search of a seaside escape. In 1957, the Sea Pines Plantation Resort became the first development in the islands, and soon the rich and affluent had a new playground while, on the other hand, fences, property lines and taxes threatened the way of life of the Gullah.  No longer free to fish and farm as they pleased, and unable to prove property ownership in most cases, many left the islands. As a result, populations of Gullah can be found in places such as New York City, where Gullah churches can be found in Harlem, Brooklyn and Queens. It is customary for these exiled Gullah to send their children to the Sea Islands in the summer months to live with grandparents or relatives in order for them to stay close to their culture and heritage.  Many also return when they reach retirement age.

Efforts to preserve the Gullah traditions and language have led to a number of initiatives. In 1979, a translation of the New Testament into Gullah was started. The result was De Nyew Testament, published in 2005.  Although there are, as previously mentioned, around 200,000 people who speak the language, there are very few who can write it and it is therefore considered an endangered language.

Remnants of African beliefs remain a part of the culture. Superstitions relating to ‘hags and haunts’ and ‘root doctors’, who use herbs and plants to protect against evil forces, all resemble traditions in West Africa.  ‘Praise Houses’, which are small structures built on the large plantations during slavery, remain an active tradition. Typically, the song and prayer services in the Praise Houses end with a ‘ring shout’, which involves moving in a circle counterclockwise, often around the outside of the Praise House itself, while shuffling, stomping, clapping and singing or praying out loud.

The largest Gullah communities in South Carolina can be found on Daufuskie, Edisto, Wadmalaw, John’s Island, and especially St. Helena Island, which is the center of Gullah culture and whose Penn Center and York W. Bailey Museum celebrate Gullah heritage drawing many tourists to the island.

In Georgia, Sapelo Island with its Saltwater Geechee community of Hog Hammock continues the battle against encroaching development and hosts an annual Geechee festival in October.

Other festivals include the Gullah Celebration of Hilton Head each February, Heritage Days at the Penn Center on St. Helena in November and The Original Gullah Festival, held in May in Beaufort, South Carolina on the mainland.