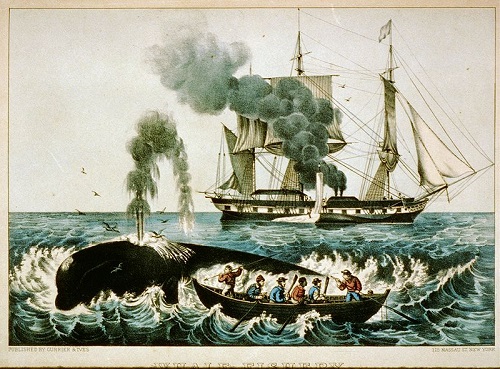 The first sighting of the island of Nantucket was reportedly in 1602, when Captain Bartholomew Gosnold of England sailed past it. He did not stop there nor even set foot upon the island. If he had, he would have found about 1600 Wampanoag inhabitants. The Wampanoags were able to live on the island undisturbed until 1659, when a group of English settlers arrived on the island which had been purchased by merchant and missionary Thomas Mayhew in 1641. When the settlers arrived, Mayhew promptly sold the island to a group of investors organized by Tristram Coffin for 30 British pounds and two beaver hats. One for him and one for his wife. There were eight other investors, each of which was  allowed to invite one partner so that, in theory, there were 20 shares. Mayhew retained one share, although he and a couple of others, never moved to the island. One of the original shareholders, William Pile, never chose a partner. He sold his share to another man and his partner share was divided in half. It was decided shortly thereafter to increase the number of shares and to offer ‘half-shares’ as well, in an effort to attract tradesman important to the development of the island. The result was 27 ‘original’ shares, some of which exist undivided to this day.  Many descendants of the original shareholders still live on the island today.

Feuds, revolts and misunderstandings ensued as many of the new settlers found this arrangement rather undemocratic. A group of the ‘half-share’ men revolted against Coffin and the ‘full-share’ men. A long lasting feud between Coffin and John Gardner, the primary advocate for the half-share men, was finally laid to rest in 1686 when Jethro Coffin married John Gardner’s daughter, Mary. They built a new  house on Sunset hill, which now is recognized as the oldest house in Nantucket, and is the only surviving building from the 17th century English settlement.

Nantucket was originally a part of Dukes County, New York until it was transferred to the newly formed province of Massachusetts Bay in 1691 and it is interesting to note that the town of Nantucket was called Sherburne until the year 1795. Many of the settlers came to the island to escape religious persecution, notably the Quakers, who arrived in the early 1700s. The island also became a known refuge for Native Americans who had left areas settled by Europeans.

With time, the Wampanoags began to dwindle in numbers due to plague and diseases to which they had no immunity. The last native Wampanoag was Dorcas Honorable, who died in the year 1855.

The first English settlers initially had little interest in whaling and were content to raise sheep. This all changed with the first close encounter with a whale which  had entered the harbor. Although the native Wampanoags had engaged in whaling and actively participated once things got going, it was deemed necessary that an experienced whaling instructor be brought to the island. Icabod Paddock was the man selected for this job, and soon the whaling industry was in full swing. By 1719, there were 24 whaling ships. The whaling industry revolved primarily around the stripping and cooking down of the blubber into whale oil, which was stored in casks and whose main purpose was to be used as lamp oil. It could also be made into soap or a form of margarine. The first whales to be harpooned were a species called right whales. In 1711, sperm whales were discovered inhabiting the waters just outside of the previous whaling area. The sperm whale oil was of a much higher grade. Soon Nantucket whalers were pursuing whales from the Carolinas to the Arctic Circle and beyond. Some whaling voyages would last for years. Herman Melville’s famous story Moby Dick‘s characters Ahab and Starbuck were both from Nantucket.

During the American Revolution, as many as 1600 men from Nantucket lost their lives at sea or on prison ships although the islanders had wanted no part in the war. The island became subject to regular plundering and was left isolated and defenseless. More hardships came with the War of 1812, when the island was subject to naval blockades. With the signing of a treaty in 1815, the islanders were able to resume whaling. Men from the islands of Cape Verde were actively recruited and played a significant role in the thriving and growth of the Nantucket whaling industry.

By the 1820s, Nantucket was the busiest whaling port in the world and nearly everything on the island was tied to the whaling industry.

This began to change with the appearance of kerosene in the 1830s. An even greater reversal of fortune occurred with the great fire of 1846, which started in a hat shop on Main Street. The fire left one third of the town destroyed and hundreds homeless. Additionally, the harbor had been accumulating silt, which made access for the whaling ships difficult. The industry was soon in serious decline, as was the population of the island. The final straw was the event of the American Civil War, during which nearly all the whaling ships were destroyed. The last whaling ship, the Oak, departed the island in 1869 and never returned. Nantucket’s population dropped from 10,000 in 1830 to only 3200 residents by 1875.

Once again, Nantucket found itself isolated and forgotten. It wasn’t until the mid 20th Century that Nantucket’s fortune reversed again. Although an actor’s colony was established on the island in 1884, the tourism industry did not begin to thrive until developers started restoring the pre-Civil War structures on the island in the 1950s. Because of the lack of anything really happening on the island for so long, it had been protected from development and over 800 buildings, including elegant mansions and shops still stood. Strict building codes were put in place and these historic structures were restored. The waterfront was completely revitalized in the 1960s and by the 1990s, the island was a hugely popular destination and summer home for the jet set. Millionaires and billionaires are now a significant percentage of the population. The island became a National Historic Landmark in 1996. In spite of an attempt in 1977 to secede, together with neighboring Martha’s Vineyard, Nantucket remains a county of the Commonwealth of Massachusetts.

Famous Nantucket natives include Maria Mitchell, the woman who discovered the first comet, R.H.Macy, the founder of Macy’s department stores and J.A.Folger, the founder of Folgers Coffee.