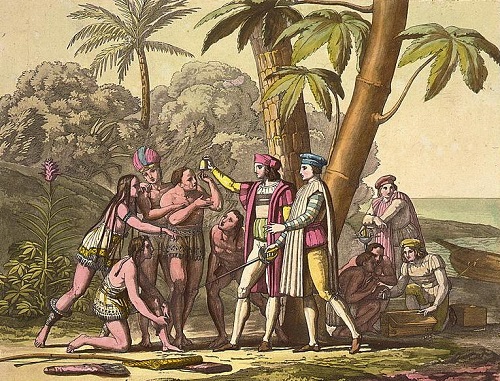 For thousands of years before Christopher Columbus set foot on the islands of Bocas del Toro, they were inhabited by Indians of the Guaymi, Teribe and Bokota tribes. The Ngäbe (or Ngöbe) and Buglé are subgroups of the Guaymi. They are often grouped together and referred to as the largest indigenous group in Panama even though they speak separate languages.

When Columbus arrived, his ships were in need of repair and the calm waters and fertile ground of the archipelago made it the perfect place for him to rest and make repairs. The year was 1502 and this was Columbus’ fourth and final journey.

Columbus named many of the islands. Isla Colón is refers to his name, as does Isla Cristóbal. Isla Bastimentos refers to supplies and Carenero to ‘careening’, a nautical term for leaning a ship on its side.

In the 17th Century, the area was a haven for pirates who, taking their lead from Columbus, used the islands as a place for building and repairing their ships. The area was largely ignored by the Spanish due to its lack of gold compared to the rest of the Panamanian Isthmus. The area, in fact, was avoided due to the pirate problem. Rumors of buried pirate treasure persist although none has been found.

The Spanish only took interest in the area when French Huguenot settlers started settling in. The prompt response from the Spanish resulted in the Huguenots being driven out and much of the indigenous population being decimated either by disease of by the sword.

In the  19th Century, wealthy aristocrats from Jamaica and other British possessions arrived, seeking, among other things, to avoid taxes. They brought with them a great number of slaves from the USA and the nearby Colombian islands. Bananas, cacao, sarsaparilla, coconut and sugar cane were all cultivated alongside a thriving industry in tortoise shell and live turtles.

The town of Bocas del Toro on Isla Colon was founded in 1826. For much of the 19th and part of the 20th Centuries, it was the third most important city in Panama due to the booming banana industry.

When slavery was abolished, these landowners left, leaving the slaves behind. Sustaining themselves through farming and fishing, these slaves were soon joined by black Jamaicans.

In 1890, three American brothers started the Snyder Brothers Banana Company. This was the real beginning of the boom in the banana business. In 1899 their business was taken over by the United Fruit Company, who set up business in Bocas town. Today, United Fruit is part of the well known Chiquita brand, which exports three-quarters of a million tons of bananas annually from Bocas del Toro Province.

Originally belonging to Costa Rica, the islands were forcefully claimed by Colombia when Panama became a part of Colombia in the early

part of the 19th Century. It was in 1821 that Panama ceded from Spanish control and joined with greater Colombia, although retaining its own governor. In 1843, however, governing power was transferred to Bogota. After several attempts at independence, Panama became fully independent in 1903, although the USA bought the rights to build and control the Panama Canal for nearly a full century.

Today, Bocas is one of Panama’s top travel destinations. For many years it was an off the beaten path destination for backpackers and other young, adventurous types. Now, with paved roads, and the arrival of the all inclusive luxury resort, it enjoys a much broader popularity, attracting expats, retirees and those seeking a romantic getaway.