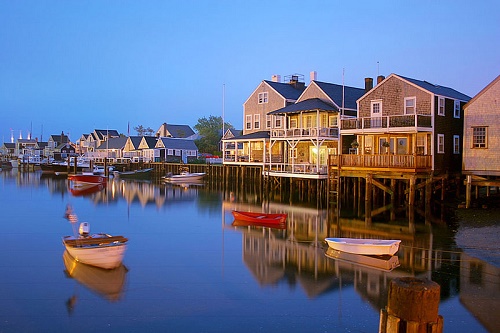 This month we will spend a little time exploring the small island of Nantucket. The name, which is said to be a Native American word meaning ‘That Far Away island”, refers simultaneously to the island, county and town.  Located about 30 miles south of Cape Cod, it is part of the state of Massachusetts.

Once considered the whaling capital of the world, the island had a booming economy in the 18th and early 19th centuries until a fire, which started in a hat shop on main street, destroyed one third of the town. Additionally, silt had been building up in the harbor, preventing the large whaling ships from accessing the harbor. By the end of the Civil War, in 1865, the whaling industry had completely left the island, moving to the port of New Bedford on the mainland.

A period of isolation followed, leaving Nantucket relatively forgotten. This ended up being a huge benefit in the end, as the many original shops and houses were left untouched by commercial development.

In the 1950s, developers began restoring the town. In the 1960s, the waterfront was revitalized, and by the 1990s, the island was a prime destination for the jet set with property prices exceeding those in the Hamptons of Long Island.

Today, Nantucket, whose population of around 10,000 swells to 50,000 in the summer months, is a beautifully preserved, picture perfect island with cobblestone streets, brick sidewalks, electric ‘gas’ street lamps and world class dining. The island has captured the imagination of of those seeking an escape to a place with old world charm where time seems to stand still, yet offering all the best of modern amenities.

The island has limitless public beaches, numerous bike paths, cranberry bogs, heathlands  and moors, lighthouses and plenty of history. At only 47.8 square miles, it is easily explored in a day, but its charms will beckon any visitor to stay much longer.

The island’s climate is influenced much by the Atlantic Ocean, and the frequent foggy days have earned it the nickname “The Little Grey Lady of the Sea”.  I am looking forward to meeting this ‘lady’, learning more about her interesting history and finding out what she offers that attracts celebrities, CEOs and politicians as well as the ordinary traveler to her shores on a regular basis.