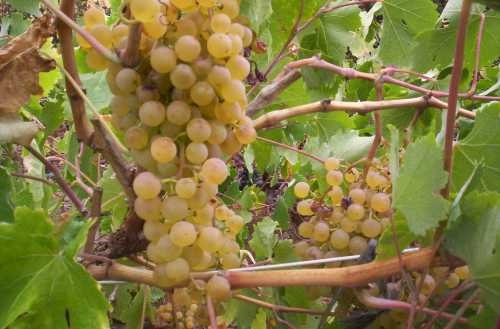 The foods of the Canary Islands include typical Spanish dishes, but with noticeable influence from the early Guanche inhabitants, North Africa and, due to migration in the early 20th century, Latin America. The Canaries were usually the first stop on return voyages from the Americas and therefore were introduced to items such as potatoes, beans, corn, cocoa and tobacco. It may be due to their previous isolation from the rest of the world that the traditional cuisine is fairly simple, with few ingredients. Today’s Canarian cuisine, however, is quite varied, sometimes quite rich, and generally very delicious.

One of the most ubiquitous offerings in Canarian cuisine is papas arrugadas, which means simply, wrinkled potatoes. These are prepared by boiling small potatoes in salt water, draining the water when cooked through, then putting them back in the hot pan until they become wrinkly or form a light salty crust. They are traditionally served with a mojo, or sauce. Red mojo is made with paprika, or sometimes hot peppers for a spicy mojo picón. The green version is based on green herbs such as coriander, cilantro or parsley. These sauces are also served with meat and fish.

Gofio is a flour made from roasted corn or wheat and is a common ingredient in many Canarian dishes. Believed to have been a part of the Guanche diet, it has been a staple of the Canarian diet throughout its history. In more recent times, its use has spread from the Canaries to the Caribbean and South America. Another popular ingredient is miel de palma, which is sap from palm trees, mostly produced in La Gomera.

There are a variety of meats featured in Canarian cuisine. Fish, of course, is abundant and occupies an important role. Puchero Canario is a stew which can include pork, chicken or beef, pumpkin, cabbage, sweet potatoes and other vegetables. Traditionally, the broth is drained off and served as a soup at the beginning of the meal and the meat and potatoes are served as a second course.

Sancocho is a fish dish with potatoes, sweet potatoes, and gofio, served with mojo. Conejo al salmorejo is a rabbit stew with tomatoes and coriander. Ropa vieja, or ‘old clothes’ is a dish made with chickpeas, meat, onions and potatoes. It is the father of the Cuban dish of the same name featured in our post on Cuban cuisine.

Almogrote is a spread, or paste made by incorporating leftover cheese with hot pepper, paprika, olive oil and garlic with a mortar and pestle. Native to La Gomera, this cheesy and sometimes quite pungent condiment is another popular accompaniment to wrinkled potatoes. And while on the subject of cheese, it needs to be mentioned that all of the islands produce cheese. Majorero cheese, produced on the island of Fuerteventura has been called the ‘best goat cheese in the world’. In fact, the many varieties of Canarian cheeses continue to win awards, year after year.

Popular desserts include quesadilla, a cake made with cheese from El Hierro and Principe Alberto, a chocolate cake from La Palma. At Christmas and at Carnival time, small pies filled with sweet potato and almond called truchas de Navidad are popular. Bienmesabe is a popular dessert throughout the islands. It is an almond cream dessert made with honey, ground almonds, cinnamon and egg yolks.  Frangollo is a dessert made from corn flour, sugar, almonds and raisins. There are in fact, many desserts made with the aforementioned gofio. Canarians even put it in their coffee and other beverages. This, of course, brings us to our next topic: beverages.

It should first be mentioned that the wines of the Canary Islands are exceptional. The islands are divided into ten geographical denominations. Each of the islands is a denomination, except for Tenerife which is divided into five. The Canaries are the most tropical wine growing region of Europe. The tropics are generally not ideal for producing wine, but the topography and volcanic soil greatly improve the situation. Some of the best known wine is produced on the slopes of El Teide, Spain’s highest mountain.

The wines of the Canaries are unique in many ways. The vines are extremely old and have never been affected by phylloxera, the microscopic aphid like insects that destroyed many European vineyards in the mid-19th century. Wine has been produced on the island for 500 years. Each of the islands has unique soil and climate conditions which result in a wide variety of distinctive wines. The grapes grown and used are local varieties and there is a tendency toward sweeter wines with white grapes making  up the majority, although excellent red and rosé wines are also produced. The grapes include Palomino, best known as the grape from which sherry is produced, Malvasia, used to make the sweet Malmsey wine which was popular in Europe for some time, Marmajuelo, only grown in the Canaries, which produces quite exotic flavors, and the red grapes, Listan Negro and Tintilla. Not much wine is exported these days, due to demand from locals and the tourism industry. This is perhaps another good reason to go visit the Canaries!

The Canaries produce excellent rums, including the popular ron miel, or honey rum. Beers include Tropical produced in Gran Canaria and Dorada from Tenerife.

To finish off our adventure exploring the Canary Islands, we have a cocktail based on a popular drink in the Canaries. Licor 43 is the most popular liqueur in Spain. The barraquito is a pretty, layered drink especially popular on Tenerife which incorporates espresso, condensed milk, frothed milk and the liqueur. Our version mixes it all up and adds rum. Its much easier to make, I’m sure, and very tasty. 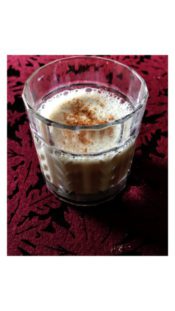 Shake first four ingredients with ice, strain into a glass and sprinkle cinnamon on top to garnish.

2 thoughts on “Wrinkled Potatoes, Old Vines and the Cafe Tropical – The Food and Drink of the Canary Islands”