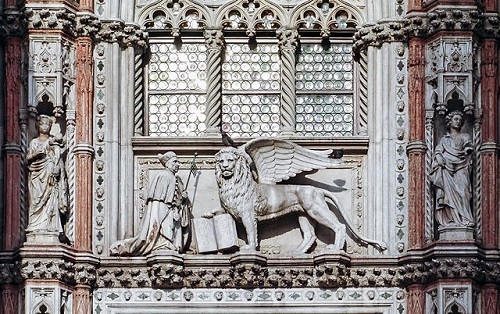 The first inhabitants of Venice were fishermen and salt workers known as “lagoon dwellers”. An influx of refugees fleeing from cities occupied during the Germanic and Hun invasions, led to the permanent establishment of a settlement. The settlement, which was to become the governing center of a vast republic over the course of a millennium, was governed by a Doge. Doge is Venetian dialect, and is roughly the equivalent of ‘Duke’, and stems from the Latin ‘Dux’. Tradition holds that the first Doge gained power in 697, but the official election of a Doge by members of the 12 founding families of Venice, began in 726 with the third Doge. Over the course of Venice’s history, 120 Doges would be elected, ruling from and residing in the Doge’s palace, which they would rarely leave, except for important diplomatic reasons or to go to church services on Christmas. In spite of this seclusion, the third Doge, Orso Ipato, was murdered in 737. Other Doges met with tragic ends as well. In 755, the Doge was deposed and blinded. In 756, and 764, the blinding and deposition of the Doges was repeated and in 803, the Doge fled due to opposition.

The early days of Venice witnessed a back and forth from Byzantine to anti-Byzantine powers. In 810, invaders under the control of Charlemagne’s son Pippin, laid siege to Venice, but succumbed to the diseases of the swamp and were forced to retreat.

Shortly before 1,000 AD, Venice received recognition from Rome and therewith received trading rights which would propel Venice’s rise to prominence as a trading and shipping center. A popular Venetian legend tells the story of the smuggling of St. Mark the Evangelist’s corpse in a shipment of pork from Alexandria, Egypt. St. Mark was to become the patron saint of Venice. The spectacular Basilica of San Marco was completed in the year 1094.

Over the next 400 years or so, the Republic of Venice would go on to acquire control of lands in Dalmatia, Crete and Cyprus, expanding the republic and its territories. The city itself would reach the status of most prosperous city in all of Europe at the end of the late 13th century. Grand palaces were constructed and the city’s great wealth attracted and supported the greatest artists and craftsmen.

In the years 1348 and 1349, Venice suffered a major blow when 60% of the population succumbed to the ‘black death’. A different kind of blow occurred in 1492 and 1498 when Christopher Columbus and Vasco de Gama opened up the transatlantic trade, greatly reducing Venice’s role as a center of trade. Venice encountered the Plague in 1575-1576 and again in 1630, when about a third of the population died.

In the year 1637, Venice became the location of Europe’s first opera house for a paying public, securing it’s place as a center for opera performance with the best singers performing operas of Monteverdi and Cavalli. By the end of the 18th century, Venice was considered by many as the most refined and elegant city on the continent – a center of music, art, literature and architecture.

The end of the republic came in 1797 with the arrival of Napoleon. The Austrians would take control for 7 years at the beginning of 1798. From 1805 to 1814 it became part of Napoleon’s Kingdom of Italy which included all of Northern Italy in union with France. With the abdication of Napoleon and the signing of the Treaty of Paris, Venice returned to Austrian control. Thousands of troops took over the city and taxes were imposed along with a house numbering system, leaving much of Venice poor and starving.

In 1836, La Fenice (The Phoenix), Venice’s most famous opera house, which had been built in 1792, burned down. It was rebuilt but burned again in 1996, after which it was rebuilt and restored to it’s former state by use of film footage taken inside the opera house. An interesting account of the 1996 fire in the form of a mystery novel can be read in John Berendt’s book City of Falling Angels.

In 1846, the first train crossing to Venice from Mestre on the mainland was established with the completion of a two mile long bridge over the Venetian Lagoon.

Unification with Italy for Venice and the surrounding Veneto region came in 1866 as a result of the risorgimento, or ‘resurgence’, which was the movement to unite all the different Italian kingdoms and states of the Italian peninsula. In 187o, Rome was established as the capitol.

In 1895, the Venice Biennale, a biannual exhibition of art was established. Over the course of the following century, theatre, cinema, music and architecture were added and the Biennale cemented its reputation as one of the most prestigious cultural events worldwide. The Venice Film Festival, which began in 1932, was the world’s first film festival. Venice has never ceased to attract the greatest minds in music, literature and the arts. Richard Wagner, Robert Browning, Sergei Diaghilev and Ezra Pound were all associated with the city and died there.

In 1924, the islands of Burano and Murano officially became a part of the city of Venice and in 1933, the Freedom Bridge was opened by Mussolini, which opened up access to Venice by car.

Venice was fortunate to have escaped the widespread destruction of World War 2, for the most part. The islands of Venice have been less fortunate in their battle against the sea. As a city built largely on water, it has been susceptible to major flooding, and faces the possible threat of sinking into the sea. In 1966, Venice experienced its highest level of ‘acqua alta’, or high water, with the second highest level occurring as recently as 2019. The population of the historic center of Venice is around 50,000 as of 2019, but attracts around 25-30 million visitors per year, many of which arrive on hundreds of cruise ships, or as day trippers. Crowding and high water continue to be the two biggest challenges facing this city which the New York Times called “Undoubtedly the most beautiful city built by man”.