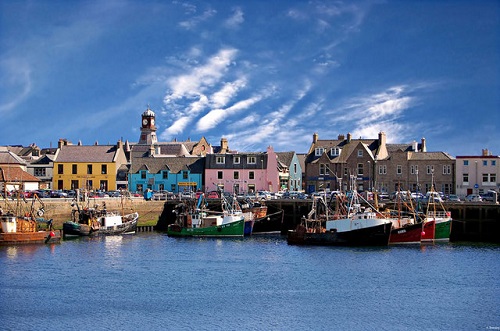 Continuing farther out into the Atlantic from the Inner Hebrides, we arrive at the Western Isles, or Outer Hebrides. There are fifteen inhabited islands that belong to the main archipelago of the Outer Hebrides. There are also some smaller archipelagos that are more remote, but which are also officially part of the Outer Hebrides jurisdiction. Overall, there are over 100 islands and islets, most of which are uninhabited. The total population of the Outer Hebrides rounds up to about 27,000. Around 21,000 people live on the largest island of Lewis and Harris, which is one island although it sounds like two.  Just over half of the population speaks the Gaelic language, making it the strongest Gaelic speaking area in Scotland. In rural areas most of the signs are in Gaelic. The generally agreeable maritime climate of these islands creates winters that are rarely cold with almost no snowfall. In the midsummer, when the weather is mild, it is only dark for two hours. Weather is unpredictable however and the islands are often surrounded by stormy seas.

Prehistoric ruins are common in these islands. Brochs, a unique iron age stone roundhouse found only in Scotland, cairns, which are tall stone piles used either as grave markers and monuments, or for a number of other things from marking trails and locations of food caches or buried items, wheelhouses, iron age roundhouses with double walls, a hearth at the center and a structure resembling the spokes of a wheel and menhirs, or standing stones dating as far back as 1,500 – 4,000BC are typical examples.

The Norse possessed these islands for 400 years. It was the clans who took over in 1266, however, who built the majority of the castles scattered across these isles, many now just a ruin, but many still inhabited or converted to other uses. The MacLeods of Lewis, MacLeods of Harris,  MacDonalds of Clan Ranald (North Uist, Barbacula and South Uist) and MacNeils of Barra are the most important to the history of these islands.

Lewis and Harris is Scotland’s largest island. The most northern of the group, it is made up of Lewis in the north and Harris in the south. Sometimes referred to as separate islands, they are actually connected. The boundary is located where Loch Resort extends from the western side and Loch Seaforth from the eastern side. There is a much more narrow isthmus to the south which makes it kind of confusing. Until 1975 Lewis and Harris belonged to separate counties. They now belong, along with the entire island group, to the Western Isles Council. Lewis is relatively flat except for the very southern part where mountainous terrain historically made passage to Harris quite problematic. With road access, it is nowadays a much more unified place. The largest settlement is Stornoway, a town that thrived in the 1800’s with the herring boom. A pretty town with a good harbor, Stornoway is the gateway to the Outer Hebrides. Lews Castle, built by James Matheson, who bought Lewis in 1844 for 190,000 pounds, is located west of town and is now an archive and museum.

Blackhouses are old stone houses traditionally built with a double wall and thatched roof. The houses contained separate areas for animals and humans. With no chimney for the smoke from the hearth to escape, they often had blackened walls. It is generally believed that the term ‘blackhouse’ was used to distinguish from white, or new houses. The blackhouse village of Gearrannan dates back to the 1600s, although the existing blackhouses were constructed in the 1800s. In 1974 they were deserted, but then in 1989 they were refurbished and modernized for tourists. The nine restored houses now offer accomodations, a small gift shop and a cafe. The Blackhouse Museum at Arnol offers the experience of seeing what life was like in  a functioning blackhouse.

The Callanish standing stones, located near the west coast by the village of Callanish, are older than Stonehenge and are believed to be 3,000-4,000 years old. Associated with ancient religious worship, the most impressive of the several groupings is Callanish I, which has a visitor’s center nearby. Callanish II and III are less than a mile away. There are 19, although the higher numbers are often just single rocks. The northern tip of Lewis is called the Butt of Lewis and is marked by a lighthouse. Nearby is a natural arch called the ‘Eye of the Butt’.

Harris is mountainous compared to Lewis. It also has some of the best white sand beaches to be found anywhere. The most famous product of the Outer Hebrides is Harris tweed, which originated on Harris and continues to be produced today. The largest settlement on Harris is Tarbert, located on a narrow isthmus. Tarbert hosts the Scottish Series, the 2nd largest yacht race in Britain, as well as an annual seafood festival.

South of Lewis and Harris are the islands of North Uist, Benbecula and South Uist, all connected by causeways. North Uist is mostly flat with peat bogs and some low hills. Most settlements are on the west coast except for the main settlement of Lochmaddy, and old fishing port which lies on the rocky east coast. The only bank and tourist office are located here. Interesting sites on the island include the Pobull Fhinn neolithic standing stones, the 5,000 year old cairn at Barpa Langass, the broch at Dun an Sticir and the Gothic Scolpaig Tower.

Just north of North Uist, and connected by a causeway, is Berneray. Berneray was the home of Angus MacAskill, the strongest man who ever lived. At 7′ 9″ tall, he became famous for his feats of strength. Queen Victoria was so impressed by a visit and demonstration of his strength, that she gifted him two gold rings. He eventually became part of PT Barnum’s circus.

Flat and Gaelic speaking, Benbecula lies between North Uist and South Uist and is connected to both by causeway. Balivanich is the main administrative center for North and South Uist, Benbecula and the surrounding islands and is serviced by an airport. There are castle and chapel ruins to explore and lots of lochs (the Scottish word for a lake or inlet).

South Uist offers more neolithic stones and cairns, 13th century church and chapel ruins at Howmore, quaint thatched buildings (including the 5 star luxury variety) and a nature conservation area. It also has the only prehistoric mummies in all of Great Britain at the archaeological site of Cladh Hallan. The site dates back to 2000BC. Four skeletons of bodies that are thought to have died around 1600BC were preserved after death by peat bogs and then buried centuries later, perhaps for religious ceremonial reasons. South Uist is mainly flat on the west side where the nature reserve is located. The machair, or grassy plains of the reserve are home to over 200 flowering plants as well as significant bird life and the nearby coast boasts a continuous sandy beach. The east side of the island is the mountainous side whose most prominent peaks are the Beinn Mhòr and Hecla. The main village on the island is Lochboisdale, which thrived during the herring boom of the 1800s.

At the southern end of the Western Isles lie Barra and Vatersay. Barra is a popular tourist destination whose airport has the only commercial beach landing in the world. It is also reachable by ferry from Oban.

The main town of Castlebay is distinguished by Kisimul Castle located on a rock in the bay. Built in the 1500s, the castle was leased to Historic Scotland (now Historic Environment Scotland) by Clan MacNeil in 2001 for 1000 years. The price per annum was one British Pound and a bottle of whisky. Dun Mhic Leoid is a small medieval tower house on an island in Loch St. Clair (also called Loch Tangasdale). Don’t miss the Hebridean Toffee Factory and the Barra Heritage Centre with its Gaelic history exhibits and tearoom. Iron age ruins, sandy beaches, friendly people and events such as the Barrathon, an annual half marathon and the Barra Festival make the island a fun place to explore.

Connected by causeway to Barra is the much quieter Vatersay, whose only village is also named Vatersay. With only about 100 inhabitants and shaped like an H lying on its side, it is the southernmost inhabited island of the Outer Hebrides and is the westernmost permanently inhabited island of Scotland and in Great Britain.

Forty miles west-northwest of North Uist lies the archipelago of St. Kilda. Evacuated in 1930 after 2000 years of habitation, the island of Hirta is the largest of the group. Previously avoided diseases, a loss of many young men during World War 1 and contaminated farmland made it impossible for those remaining to continue living on the island. The evacuation to mainland Scotland took place on August 29th. The last former resident of the island died in 2016. Those who visit will find the ruins of an abandoned village, unique stone huts called cleits and the highest sea cliffs in the UK. There is a small military base which also has a pub, the Puff Inn accessible only to the seasonal volunteers at the base. It has been called the most remote pub in Europe. The three smaller islands are Dùn, Soay and Boreray. Boreray has some stone ruins, showing evidence that it was once populated. Otherwise, these remote islands are home to bird colonies and some unique varieties of sheep.